This list is only a sample of the very many attraction sites for birdwatching in Israel.

Has a large variety of habitats from Alpine habitats in the Hermon Mountain, to Mediterranean forests, woodlands and shrubs and in addition some man made habitats which include agricultural fields and fish ponds. Each habitat has its own unique bird species. 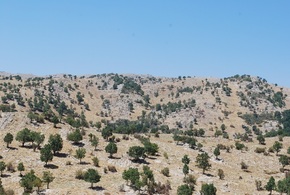 The mountain peak is about 2224 meters high and it is  the highest mountain in Israel. The mountain slopes are  characterized by various vegetation which populate different birds.
Some of the birds which can be seen all year long are: sombre tit (Parus lugubris), Rock nuthatch (Sitta neumayer), Horned lark (Eremophila alpestris), and Rock bunting (Emberiza cia).
During the spring and summer one can see: Black headed bunting (Emberiza melanocephala), Syrian serin (Serinus syriacus), Hill sparrow (Carpospiza brachydactyla), Upcher's warbler (Hippolais languida) and White-throated robin (Irania gutturalis).
Due to weather conditions, logistic and birds numbers it is best to travel to the Hermon during spring and summer time. 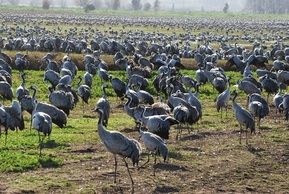 Cranes- Hula valley
The Hulla valley includes a variety of habitats like agricultural fields, fish ponds, the Hulla nature reserve and  flooded areas. All of which attracts thousands of ducks, raptors, shore birds and passerines. The Hulla valley is an  excellent birding site throughout the year and has an active ringing station.
Here is a list of some of the birds which can be seen there: Raptors: White tailed eagle (Haliaeetus albicilla), Spotted eagle (Aquila clanga), many of the Harrier sp. Wetland sp.: Cranes (Grus grus) can be seen by thousands while feeding in the fields, and sometimes  Demoiselle Cranes (Anthropoides virgo).  A variety of duck species,  herons, storks and many more. 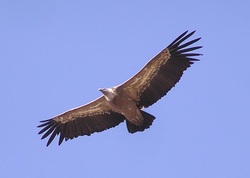 Griffon Vulture-Gamla
Gamla is a nature reserve and archeological site located in the center of the Golan Heights. The reserve is famous in one of the largest Griffon Vultures colony In Israel. There are some more raptors species you might see in the reserve such as: Egyptian Vulture, Black Vulture, Short toed Eagle and Bonelli's Eagle. 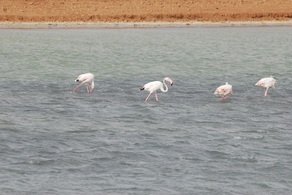 Greater Flamingo
The site is located on the seashore of the Mediterranian Sea  between Tel Aviv and Haifa. The area is rich in fish ponds and marshy vegetation which attracts many bird species like sea gulls, seashore birds, ducks, migrating  raptors and passerines.
It is an excellent  birding site all year long but the best seasons would be during spring and winter.
Nearby, north of Maagan Michael are the Atlit salt ponds which  are characterized by seashore birds, gulls and terns and are most famous for the Flamingoes which are often seen during  migration season. 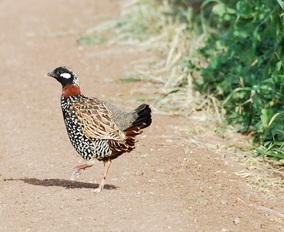 Black Francolin
Beit Shean valley offers a large variety of birds. Mainly during  winter and migration seasons. The area includes many fish ponds, agriculture fields and marsh vegetation.
Most of the fish ponds are located in 3 Kibuzim called Kefar Rupin, Sde Eliyaho and Maayan Zvi. The birds population includes wetland birds, ducks and many raptors species which migrate by thousands  during spring and autumn. A rare raptor species  which  was seen there is the Black Winged Kite (Elanus caeruleus).
Among the passerines which migrate during winter and spring, one can see the Indian Silverbill (Lonchura malabarica) which established a local population all over  the Beit Shean valley.
There is an active ringing station near kefar Rrupin. 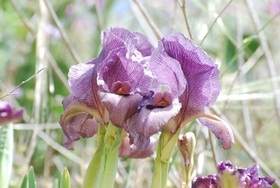 Gilboa Iris
The mountain is about 475 meters above sea level and looking over Beit Shean valley.
It is considered to be one of the best places for migrating raptors and storks during autumn migration.
Long Billed Pipit (Anthus similis) can be seen there through the entire year. Nearby there is a colony of Lesser Kestrels (Falco naumanni) in a quarry during spring till mid July.
The Gilboa is famous for  its endemic flower -the Gilboa Iris which can be seen between mid march to mid april. 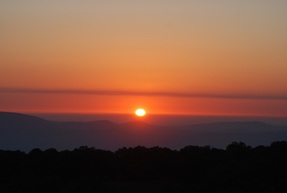 Jerusalem has several  exciting sites which are not related to birds, but there is a unique site which  acts as a "green spot " in the middle of the urban area, and this is the Jerusalem Bird Observatory  (JBO). It consists of  a little pond surrounded by a  green area of  native and planted  vegetation which attracts  a large bird population, especially, during spring. The JBO is an active ringing station and a teaching center.
"Shephelat Yehuda" or  the Judean Lowland on the outskirts of Jerusalem, is rich with fish ponds  and  marshy vegetation.
the best season is  mainly during  winter for ducks and shorebirds and spring for migrating birds like  raptors and passerines.
These are just two out of many sites in Central Israel. 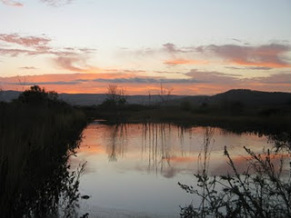 The desert in Israel occupies about 60% of the territory. Rain is scarce, but when it does, floods are formed, followed by a short-time vegetation all over the area. 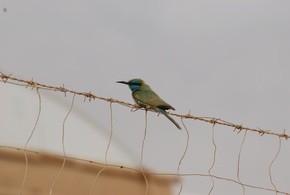 Little Green Bee Eater
Eilat is by far, the best and logical place to start birdwatching in the southern parts of Israel. It attracts an enormous numbers of migrating birds mainly during  spring, while the autumn migration is less impressive. In addition to the migrating birds Eilat has a large variety of local birds which includes desert birds, species which are specific to the great rift valley, Mediterranean and Red Sea species.
There are many sites in Eilat and its surrounding for birdwatching. Here are just a few:
The north shore: the best place  for sea birds like: many gulls sp. Lesser black backed gull (Larus fuscus), Palla's gull (Larus ichthyaetus), White eyed gull (Larus leucophthalmus). Many Terns and skuas can also be seen
On a regular basis one can see the Brown booby (Sula leucogaster), the Mangrove heron (Butorides striatus) and the Reef heron (Egretta gularis)
The south salt ponds and palm trees: The ponds attract many shorebirds, and the palm trees are a great place for passerines during the spring nigration.
Eilat birdwatching Park and ringing station: The area was once a garbage dump and became over the years a site which attracts dozens of birds.
Surrounding Eilat are some beautifull mountains which can also be a great spot to watch flocks of raptors, storks and cranes migrating over Eilat, mainly during  spring.
Holland Park: Situated in Eilat, the park has a trail which go through the park between the vegetation and the acacia trees. Its best during the spring migration season to go and have a look for the manny song birds and warblers that are all over.
THE 20 KM SITE: 20 km north of Eilat there is a variety of habitats which includes agriculture fields, marshy vegetation, salt ponds and sewage canals. All attracts many different bird species including rare ones. 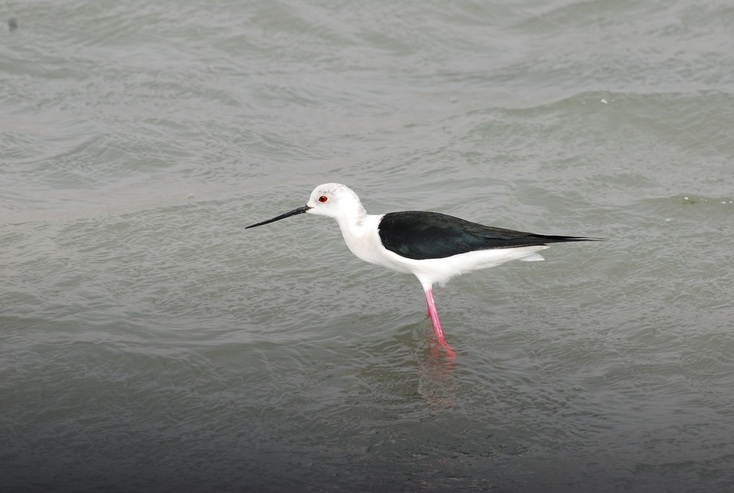 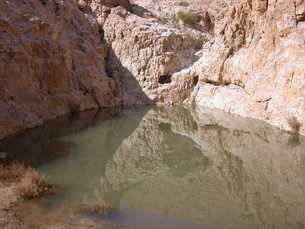 Lotan is about 50 km north of  Eilat. It offers a variety of possibilities for birdwatching.
Birds like Rock martin, Crested lark, White crowned weatear, Blackstart and many migrant  passerines such as Blackcap and Lesser whitethroat can be seen in the premises of the Kibutz.
South to Lotan there is a bird reserve with a variety of habitats such as small ponds, lucerne fields, dunes and lots of desert vegetation. All of which attracts local and migrant birds.Some of the species which can be seen are: Purple heron, Squacco heron, White stork, Hen harrier, Common buzzard and Honey buzzard.
The lucerne field attracts many passerines during the spring migration like: Quail, Richard's pipit and many other pipit's sp., Reed warbler and many other warbler sp..
North west to Lotan there is a beautifull wadi called Ketura Wadi. One can hike in the wadi (recommended during winter)  and enjoy both the wonderful view as well as the variety of  bird   species. 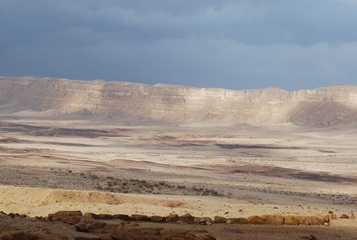 Nitzana is located near the Egyptian border. It is characterized by dry plains which  are populated  by many desert species. The highlight is probably the Houbara Bustard that can be seen all around the year (difficult to see during the summer), though it is recomended to watch her during early spring when she does her beautiful courtship dance.
Many other desert birds can be seen in Nitzana area including some Sandgrouse sp. 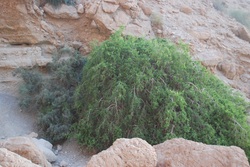 Ein Salvadora is a unique spring in Judean desert which attracts, although is a small spring, lots of desert animals- birds and others. The little spring is hidden behind a big Salvadora tree and during the early morning and late afternoon attracts birds like: desert larks, blackstarts, Trumpeter finches, striated buntings and the beautifull Sinai rosefinch.
Although, getting there needs a 20 minutes hike up hill, its a Must site if you intend to visit the Judean Desert area. 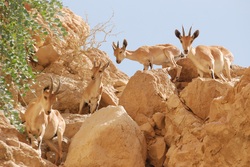 Israel Map with the main birding sites as described above: 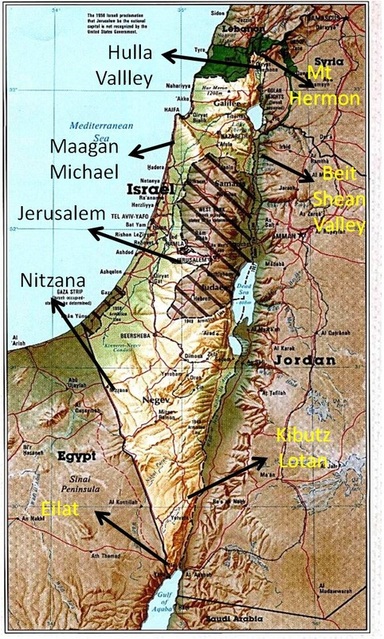